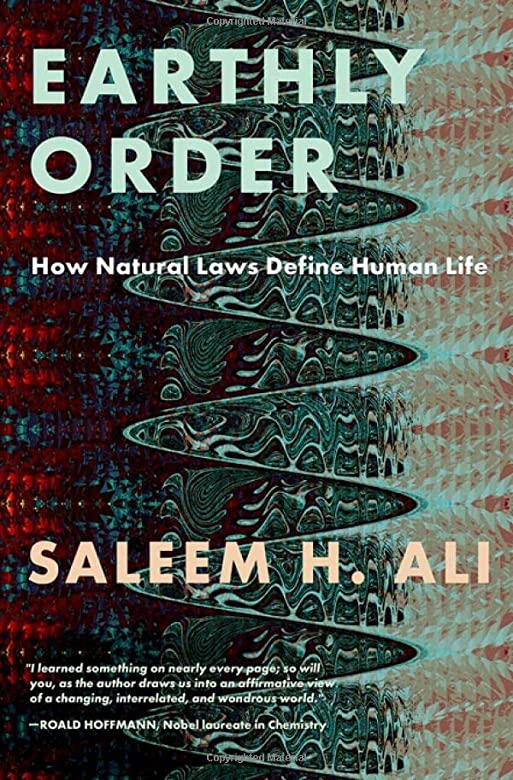 The following is an excerpt from Earthly Order: How Natural Laws Define Human Life by Saleem Ali.

Seduction of Structure in Nature

“What I see in Nature is a magnificent structure that we can comprehend only imperfectly, and that must fill a thinking person with a feeling of humility.”—Albert Einstein

As humans retreated to their residences during the Great Coronavirus Pandemic, a strange sense of consolation was found in narratives about natural systems resetting to a new normal. A structural shift to a pre-human balance of earthly forces was noted worldwide. The Hong Kong zoo was enthralled to report that their panda couple, Ying Ying and Le Le, who had remained celibate for a decade, found the composure in the absence of human visitors to engage in rapturous sex. Enchanting vistas of the Himalayas were supposedly now visible due to a clearing of smoke from South Asian cities. The silver lining to the chaos in our lives appeared to be that nature was finding a lost order and equilibrating. While some of the social media memes were clearly doctored to accentuate impact, there was also a reverse chiding of the “natural healing” mantra. Shopping carts which had fallen into murky urban rivers were also now visible due to the renewed clarity of the waterways and were a fun counterpoint of rebuke to the natural healers. Others reminded us of how nature itself could violently disrupt ostensible order through volcanic eruptions or asteroid impacts. The pantheists argued back that such disruptions were merely a self-correction mechanism for a celestial order beyond our comprehension. Frantic and frenetic as the conversations were, they provided a learning moment for us all about understanding the very nature of disturbances to planetary order.

The public went through a crash course in virology, public health, and ecology in this crisis at an unprecedented pace. The neat image of the pathogen as a prickly orb of spike proteins, lipids and nucleic acids was emblazoned everywhere. Media-savvy doctors showed us diagrams of how a lowly soap molecule could so easily bind and pry open the lipid shell of the virus, leading to its demise. The average citizen was widely exposed to debates in science about whether or not viruses can be considered alive or dead; were such dichotomous categories even meaningful? Some scientists pivoted their research to quell conspiracy theories about the virus being engineered in a lab. The method they chose for this proof was that the virus had followed a natural order of mutation rather than a human engineered one.[i] They argued that the precision with which the Covid-19 virus was able to target and enter human cells could only be a result of a natural order of mutations rather than anything humans would have engineered.

Furthermore, the viral evolution could be tracked to mutations from benign viruses in bats, and if humans had wanted to engineer a pathogenic virus, they would have focused on existing disease-causing agents first. These two insights about the virus are an intriguing starting point for us to consider how natural order might be considered in the absence of deliberate human intervention. The power of incremental change, which is the hallmark of mutative evolution, delivers a potently effective outcome of the virus entering the human cell and perpetuating its replication. Yet does such incremental change operate within specific natural structures that we might consider to be more immutable? Would an understanding of such structures lead to more predictive power that we so sought in the pandemic?  These are the questions we consider in this chapter to conceptualize how structure in natural systems can be ascertained.

The Coronavirus has the ability to infect a host because of certain fundamental abilities of its constituent molecules. In the case of this virus, it is a large ribonucleic acid (RNA) molecule that has two vital properties: a) Self-replication, meaning that it can construct an identical copy of itself through physical re-bonding of its constituent molecular parts; b) Catalysis: the ability of a substance to create a more energy-efficient pathway for a chemical reaction to occur due its structural form. Clearly both these properties are a manifestation of a molecular order which seems almost magical in its spontaneity. In essence there is a natural elegance to nucleic acid molecules that allow for these properties to be manifest. These acid molecules seem to wrap around in certain ways and form specific shapes because of some underlying natural physical laws. Core to this understanding is the realization that molecules that comprise the chemistry of life do not just operate by chance but through some latent structural mechanisms.

Chance and random mutative processes are the hallmarks of natural selection, which is established science. However, a study of evolution without considering the underlying chemical and physical laws on which it operates has led to a widespread misunderstanding about the story of living organisms. Popular views of scientific ascendance of natural selection in contrast with creationism tends to eschew conversations of order within the natural world. Yet evolution inevitably operates on an ordered template of existence. This template is what the geneticist Seward Wright referred to as a “fitness landscape” as far back as 1932 – a term given contemporary usage by the complex systems researcher Stuart Kauffman. The landscapes themselves have key structural attributes (such as the spatial ordering of proteins as suggested by the theoretical geneticist John Maynard Smith) which have allowed the speed and self-organization of molecular forms to emerge. Indeed, if we solely operated by chance at the molecular level, the probability of life emerging could not be possible within the known age of our universe.

Human ingenuity can further harness both evolution and natural structural processes for further accelerating functional order as demonstrated by the remarkable work of chemical engineer Frances Arnold. In her revolutionary approach to enzyme synthesis, Arnold and her team have harnessed the power of evolution to synthesize targeted enzymes that can serve a range of industrially relevant purposes from cleaning up pollution to making laundry detergents more effective. They even were able to develop enzymes with the help of Icelandic microbes that could incorporate silicon into biogenic molecules and make bonds between carbon and boron atoms. In her Nobel Prize lecture in 2018, Arnold referred to a short story by Argentine essayist Jorge Luis Borges called the Library of Babel which conceives the universe as a library of all possible books, most of which are gibberish. The same is true of the vast assemblage of possible compounds we could synthesize. The goal of the librarian, or that of the applied scientist or engineer, is to be able to develop tools whereby we can strategically use the structural attributes of nature alongside the power of evolution to find functional material forms.