What are the basic principles for relating Christian philosophy to the philosophies of other religious traditions? Are there good arguments for and against the existence of God? What to do with the problem of evil? Does God intervene in human affairs? What is ultimate reality from a Christian perspective? Chad Meister is Professor of Philosophy and Theology, and Chair of the Department of Religion and Philosophy at Bethel University. He is also a Faculty Affiliate of the Ansari Institute for Global Engagement with Religion at the University of Notre Dame. His primary research interests are the problem of evil, concepts of God, and comparative religion. The Global Philosophy of Religion Project aims to make the philosophy of religion a truly global field by promoting the scholarly work of researchers from underrepresented regions and religious traditions. It is led by Professor Yujin Nagasawa and hosted by the University of Birmingham. This interview was conducted by Robert Lawrence Kuhn, host of Closer To Truth. This project was made possible in part through the support of a grant from the John Templeton Foundation. The opinions expressed in this video are those of the author(s) and do not necessarily reflect the views of the John Templeton Foundation. 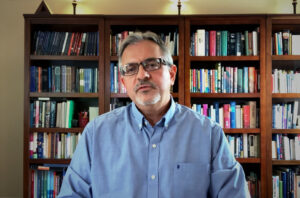