What is Islamic philosophy? What is the Islamic perspective on metaphysics --the primary issues, such as essence vs existence? What are the arguments for the existence of God in Islam and are there any arguments against? What do Islamic mystics know about God more than non-mystics? And is it proper to describe God, Allah, the Divine Reality, as a “person”, a Personal Being, with Personhood features like awareness, intent, and will? Rahim Acar teaches philosophy of religion at Marmara University, Faculty of Theology. He received his Ph.D. at the Department of Near Eastern Languages and Civilizations (NELC) at Harvard University and has published books on the existence of God. The Global Philosophy of Religion Project aims to make the philosophy of religion a truly global field by promoting the scholarly work of researchers from underrepresented regions and religious traditions. It is led by Professor Yujin Nagasawa and hosted by the University of Birmingham. This interview was conducted by Robert Lawrence Kuhn, host of Closer To Truth. This project was made possible in part through the support of a grant from the John Templeton Foundation. The opinions expressed in this video are those of the author(s) and do not necessarily reflect the views of the John Templeton Foundation. 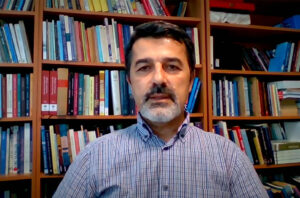